A number of members of Clan Cameron NSW were fortunate to witness the Royal Edinburgh Military Tattoo held at the Sydney stadium this October.

While not as intimate as that held in Edinburgh Castle it was certainly a spectacular event.

Some 1500 cast members were involved from across Europe and the Asia Pacific region as well as our local Australasian contingent. Over 14 nations were represented.

Set against a full-size replica of Edinburgh Castle, the iconic Scottish spectacular featured 33 musical, cultural and military groups, including:

There were rousing performances of You’re the Voice,  Land Down Under and Love is in the Air by none other than John Paul Young, who was in fine voice, among other great vocal treats. 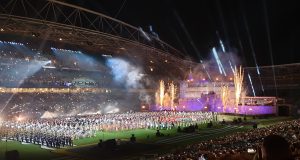 If one is unable to see the tattoo in the home of Edinburgh Castle then I suggest that one should take the opportunity of witnessing the event on home soil when the Tattoo next comes to Australia.