Last stand in the latest BATTLE OF CULLODEN

Last stand in the latest BATTLE OF CULLODEN

Its fields are soaked in the blood of 1,500 men slaughtered in 1746. But now a planning row over luxury homes and lodges has sparked…

At the visitor centre at Culloden, there is a space set aside for overcome tourists. Here they can take a seat and give all the images and emotions flooding into their brains a moment to settle.

Others, chatting nineteen to the dozen on arrival, are speechless on departure from the National Trust for Scotland (NTS) site.

For military historian Dr Christopher Duffy, a veteran of some 40 visits to the battlefield where Bonnie Prince Charlie’s pretensions to the throne were laid to waste in short order in 1746, even talking about it makes him shiver.

‘As battles go, Culloden was tiny,’ he says. ‘It was all over in an hour. The numbers involved were a tenth or a fifteenth of the numbers in the battles going on in Flanders between the French and the British at the time. But Culloden is the one people talk about.’

Culloden, he says, resonates like no other battle through the centuries and across oceans to Canada, the United States or New Zealand. It is ‘ground zero’ for generations of Scotland’s diaspora: what happened here is why they live where they do.

Little wonder so many overseas visitors are overwhelmed by the stillness, the undisturbed sense of place. It is quite a thought to reflect that their forebears may lie underfoot.

Some two-and-three-quarter centuries after Culloden, however, it is the battlefield itself which may soon be overwhelmed. d. Considered by many to be sacred d ground – indeed, a national war grave – it is viewed by others as prime real estate. Thus new battle le lines are formed between commercial interests and cultural ones, as arguments rage over where exactly the battle lines back in 1746 were.

For the commercially minded, the temptation is to invest in the idea of a ‘core’ battleground, all of which h is now owned and operated as a visitor tor attraction by the NTS.

But historians are convinced the battle was played out over a much wider area than that owned by the trust. Some say sending bulldozers s in is equivalent to razing a wing of a national archive.

‘The trouble, basically, at Culloden en is the people making the key decisions ions know nothing of history,’ says Dr Duffy.

Were it not for the fact that he is an Englishman conscious of the dangers of appearing to lecture Scots, his critique of the encroaching developments at Culloden would likely be yet more excoriating.

DR Duffy, who taught military history at the Royal Military Academy Sandhurst and was secretary general of the British Commission for Military History, has written two books on the Jacobite Rising of 1745.

He describes Culloden as easily the most arresting of the 90 or so battle sites he has visited.

The site’s tragedy, he says, is that too many engage with it symbolically, while too few see it as a historical relic which, even today, is still giving up secrets. The fear is that these secrets may be concreted over for ever before we reach them.

It was in 2014 that the Scottish Government upheld an appeal by developers whose bid to build 16 luxury homes at Viewhill near the battle site was initially rejected by Highland Council.

Later the land was sold to Aberdeenshire-based Kirkwood Homes, which pressed ahead with the development despite vociferous protests.

The building site stood only a few hundred yards from the NTS visitor centre and fell within a red line boundary that was drawn by Historic Environment Scotland to represent the area in which the battle was actually fought.

But the government-funded heritage body offered no objection to the planning application, arguing that farm buildings had stood there previously and so the site had already been developed.

For objectors, there were two key issues. First, the site is a war grave.

It is well known that, as the defeated Jacobites dispersed they were chased and cut down by the Duke of Cumberland’s Hanoverian troops. They were buried where they fell or else left to rot.

THE second issue was the sure knowledge that, should this application succeed, more would follow. So it has proved. Next month, Highland Council’s south planning applications committee is expected to consider a bid to turn part of Culloden moor into a £1million leisure destination with 13 holiday lodges, a 100-seater café/restaurant, laundry and a shop.

Then there is an application to turn a farm steading near the battlefield into a luxury home complete with a Zen garden and ‘chill-out zone’.

It has been called in by the Scottish Government and a decision has yet to be made.

Andrew Grant McKenzie, a former manager at the NTS Culloden site, says these applications confirm the worst fears of those anxious to protect the battlefield.

He says: ‘As I forewarned the directors of the NTS in 2014 and the Highland Council in 2016, the floodgates have opened since the first big development on the battlefield gained its foothold at Viewhill in 2018. The sites of current development interest are all key tactical positions for both the Jacobite and Hanoverian armies’.

‘Treetops, particularly, is an area of ground in which decisions were being made about the pincer movement which was eventually set up with cavalry at Viewhill and Culchunaig.

‘It is, then, a mistake to suppose these proposals are for developments near the Culloden battlefield. Rather, they are on it.’

But then, as Scotland’s foremost historian Sir Tom Devine has lamented, Scotland’s record in preserving sacred battle sites is a ‘wretched’ one.

At Bothwell Bridge in Lanarkshire, only one portion of the 1679 battlefield remains undeveloped and it was the subject of housing development applications in 2005 and 2013.

PLANS to widen and reroute the A9 will further erode what remains of the battlefield of Killiecrankie which, in 1689, was the scene of the first major skirmish of the Jacobite uprising.

The A1 bisects the battlefield of Dunbar, where Cromwell defeated royalist forces in 1650, and parts of the area near Musselburgh where the Battle of Pinkie was fought in 1547 have been given over to housing development.

Culloden was left as one of the very few remaining battle sites in Britain where, according to Dr Duffy, the landscape looked much as it did on the day when 1,500 of Bonnie Prince Charlie’s soldiers were hacked to death and the Jacobite rising routed.

Hence the eerie silence, the sense of awe, as visitors alight on one of the most pivotal patches of land in Scottish history.

What many fail to grasp, however, is there is historical knowledge yet to be gleaned from Culloden.

At his home in London, 84-year-old Dr Duffy has spent much of the past weeks drawing detailed maps of the battleground and tracing the paths of the Jacobite retreat.

Fresh discoveries about the battle are still being made, he says, and science and technology are combining to make further ones possible.

Are we really to brick over this precious portal to understanding?

Dr Duffy said: ‘From the very beginning Scots realised this was an event with major implications for their nation and culture, and the amount of literature available from eyewitnesses, people who kept records, memoirs and students of history ever since cannot be equalled by any other battle in the world in the 18th century. The very exciting thing is we’re finding out not just new evidence –old archival material is still coming to light – but new ways of looking at history are finding Culloden extraordinary important.’

Already, lidar scans – computer enhanced aerial scans which penetrate through vegetation to the ground below – have led to the discovery of clan graves at Culloden.

‘The ground is still giving up more and more evidence of kinds that we never suspected,’ says Dr Duffy, adding: ‘When it’s built over, it’s destroyed forever.’

In archaeology, he says, it is best practice to leave a patch of ground intact so that future diggers with more advanced methods will have undisturbed soil to work on.

‘This is made impossible at Culloden. The reason is not enough people are interested in the actual ground itself. Culloden is viewed very much in symbolic terms even by people who protest loudly about development.’

And yet, he suggests, ask them to engage in the history, in what actually went on here on April 16, 1746, and many of them ‘disappear into the night with a melodious twang’. That is not an accusation which could be laid at Joyce McKenzie’s door in Ontario, Canada. A long-term opponent of development at Culloden, she speaks of a collective failure by the Government and its agencies to protect the little patch of Scotland which means so much to her family history.

And she explains it thus: ‘In the end, money speaks louder than honour and respect for those who fought on both sides and l ay buried there.’

As one of the principal spokesmen for the Group to Stop Development at Culloden, she says few in the diaspora cannot claim an ancestor who fought or died there or suffered in its aftermath.

‘ Transportation, slavery, the Clearances – all these relate to the Battle of Culloden,’ she says.

‘Our opposition to development is not based on preventing houses from being built,’ she adds. ‘We simply do not want houses being built on, or in the areas adjacent to the battlefield at Culloden.’

Yet, with the cruellest of ironies, this week the ‘Treetops’ holiday destination’s chances of approval at the planning committee were dramatically improved by an apparent case of SNP objectors shooting themselves in the foot.

Several Nationalist councillors who were against the proposal and planned to oppose it have been forced to remove themselves from the voting process after SNP colleagues in a neighbouring ward campaigned against it.

The Inverness South SNP group had emailed members inviting them to register their complaints for a collective objection to the proposal. That triggered a warning from senior SNP figures on Highland Council that the email risked breaking planning rules on bias.

The situation was exacerbated when the group posted on its public Facebook page urging people to oppose the application. ‘Whether it be a short few lines or an extensive detailed complaint your voice is urgently required,’ it said.

The upshot is that several SNP councillors have now recused themselves from the process.

Ken Gowans, who is not a member of the planning committee but would have had an opportunity to speak as the local member for the area, said: ‘It was evident I had no option but to declare an interest in this application. My integrity and impartiality may be considered by others to have been compromised by these instances of overt political intervention.’

Highland Council said yesterday: ‘The planning application for the leisure development at Treetops is still under consideration’.

‘In the event officers recommend that planning permission should be granted, it will be presented to a meeting of our south planning applications committee for determination in due course. The associated report will be available for public scrutiny three days before the meeting, in accordance with the council’s standing orders.’

In response to Dr Duffy’s claim no historian had been consulted by decision-makers on Culloden applications, a council spokesman said: ‘It is not appropriate to provide a response while work to assess the application is ongoing.’ 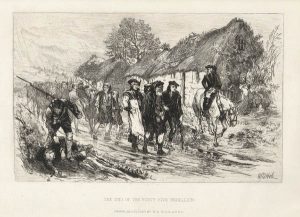 And so, 274 years on, a new reckoning looms at Culloden. Will history and reverence for all that the place represents at home and abroad win the day?

Or is money the most powerful force on the battlefield today?