The Battle of Culloden – A Common Misconception

The Battle of Culloden – A Common Misconception 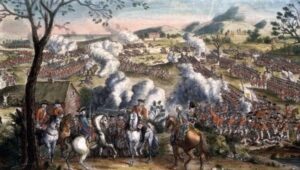 What is the most common misconception about the battle of Culloden?

Probably the mistaken story that Charles Edward chose the ground and refused to listen to his advisors. From the multiple reports of those who were there, we know this was not true.

The ground chosen by the Jacobite High Command was at Newlands, about a mile east of Culloden Parks. It was high, relatively flat so the entire battle lines could be aware of what was happening, but had enough incline to support the Highland Charge. Both Lord George Murray’s suggestions of Dalcross Castle and lining up along the River Nairn were rejected by the High Command – the former judged not good ground for the Highland charge, the latter would have allowed Cumberland to march straight past into Inverness. They formed battle lines at Newlands on April 15th and waited for Cumberland to appear. He didn’t.

The idea of the night attack on Cumberland’s camp likely came from Lord George Murray. It was a good one. With inferior numbers and very weak horse compared to the Government forces, a surprise night attack on a camp celebrating the Duke’s birthday made sense. In two columns, they left late so that they would not be seen in the twilight by the Royal Navy ships sitting out in the Moray Firth. The Prince’s column was so near the encampment, they could hear the soldiers talking, when O’Sullivan brought the news that Murray’s column had turned back without consultation or consent by the Prince or the rest of the High Command. With only half of the Jacobite Army under his command, the Prince had no choice but to turn back the long, exhausting route to Culloden House.

They were out of money and out of food. Many of the Jacobites had gone off to try to find food. The Prince had sent to Inverness to try to bargain for it with no money. They had missed two French shipments of money, arms and troops – one captured at Tongue, the other arrived in Aberdeen just after Murray had left the city for Cumberland to occupy. Cluny and Lovat were on their way north, but had not yet arrived. There were no horses to be had, so the Jacobite horse consolidated into a less than effective force.

Contrary to some claims, the desertion rate was not high in the Jacobite army. They had been at their top strength at Falkirk numbering 8000, but had disbursed across the north – taking on actions from the siege of Fort William to Blair Castle. Also contrary to some nasty propaganda still repeated today, Charles Edward did not feast lavishly while his men starved. When the news arrived the morning of April 16th that Cumberland had passed their chosen ground of Newlands and was marching toward them, there were only two choices. Find the best ground and try to stop him from taking Inverness, or run and face certain defeat. The entire High Command agreed that a slim chance of stopping Cumberland was the only the best of two bad choices. If they could hold Inverness and Fort Augustus, even without Fort William, they might hold the line at the Great Glen.

With the Government dragoons and cavalry so strong, the risk to the Jacobites was outflanking on both wings of the battle lines. In order to prevent this, the Jacobite forces lined up between the Culwhiniac and the Culloden Park walls.

Ironically, one of the Government soldiers who wrote about the battle remarked that the Jacobites had taken a strong position on the field.