Congratulations and thank you to members of the Group to Stop Development at Culloden (GSDC) who can now rejoice, as can we all, on the unprecedented decision taken today by Scottish Ministers to refuse planning permission for the house at Culchunaig.

The proposed luxury house at  Culchunaig is marked number 8 on the GSDC map and is located on a hugely sensitive site within Culloden Battlefield. 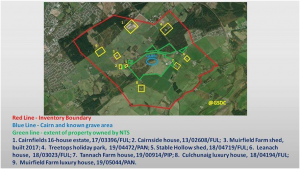 A previous application was approved by Highland Council and the council was minded to grant the second application.

The GSDC worked hard to get the second application called-in by the Scottish Government, which happened.

An appointed Reporter then recommended that planning permission be granted.

This was overturned and the Scottish Ministers’ decision to refuse is final.

A momentous turnaround of events, and one that we all sincerely hope marks a new dawn for the protection of the Culloden Battlefield especially with still four live applications awaiting determination, including a holiday resort.

Congratulations again to all who objected, with special mention to Professor Christopher Duffy and Andrew Grant McKenzie.

Directorate for Local Government and Communities Planning and Architecture

FORM HOUSE AND ERECTION OF OUTBUILDINGS AMENDED DESIGN (TO

submitted to The Highland Council by MRH Design on behalf of ...(redacted)….

application for their own determination. The Direction was given due to the

Proposed Development’s potential impact on Culloden Battlefield which is a

character or appearance of the conservation area. Ministers also consider that the

Proposed Development is not in accordance with the development plan overall, being

contrary to Policies 35, 28 and 29 of the Highland-wide LDP. The Proposed

Development is also contrary to the overarching principles of HEPS, in particular the

Accordingly, for the reasons set out above Scottish Ministers hereby refuse planning

Full details of the Scottish Ministers planning decision can be found at the following link:

The Group to Stop Development at Culloden Facebook link is: