The rising generation may not have heard much about the subject of this short narrative, but his name was a household word in the districts of Lochaber, Appin, Ardnamurchan and Sunart and as far south as Falkirk, during the last century [19th]. 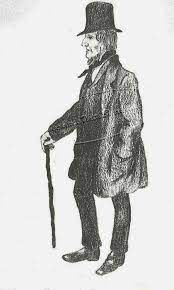 John Cameron of Corrychoillie, or “Corry”, as he was universally designated throughout those districts, was a most famous stock dealer in those days. In fact, he used to boast that the was the greatest livestock holder in the world.

Opportunity may here be taken of recounting some of the stories associated with his name.

Once when appearing as a witness before the High Court of the Justiciary of Inverness, he rather disconcerted the pompous Counsel for the Crown, and to show Corrychoillie’s pawky mood the following cross-examination may be given:

Counsel: “I believe your name is John Cameron?”

“You are a pretty extensive farmer near Fort William?”

“How many sheep will you have grazing on the hill pasture at a time?”

“I can’t remember the exact number at present.”

“Try and let us know as near as you can.”

“Have you five thousand?”

“Have you ten thousand?”

“Why, I have that of black cattle and horse.”

“Will you have twenty thousand?”

“Then I suppose you can be no other than the great Corrychoillie of the North?”

Discussing stock markets with Corrychoillie one evening, a guest gave it as his opinion that the former was even a greater man than the Duke of Wellington.”

“Hoot, toot,” replied Cameron, that’s too much—too much by, by far.”

“Not a bit,” continued the other, as he enlarged on the skill required in concentrating stock at a Southern market. “Do you think the Iron Duke would do as well as you?”

Brooding for a space over his toddy and snuff, Corrychoillie answered, “The Duke, nae doot, was a very clever man: very, very clever, but I’m not sure, after all, if he could manage twenty thousand sheep, beside black cattle, that couldna understand one word he said, Gaelic or English, and bring ever hoof of them to Falkirk Tryst. I doot it, I doot it.”

Travelling south by steamer, from Fort William to Glasgow, one day, Corrychoillie became enamoured by one of the day passengers, and during the voyage could scarcely keep his eyes off the fair charmer’s face.”

Observing his interest, a gentleman accosted Cameron and said, “Would you care to by the lady?”

“I would,” returned the farmer, “What is the price?”

“It’s a bargain,” said Corrychoillie, forcing a guinea as arles into the hand of the amazed stranger.

On reaching Greenock, Corrychoillie travelled to Glasgow by rail, and having drawn £1,000 from a City Bank, claimed his purchase on the arrival of the steamer at [the] Broomielaw.

The gentleman who had made the facetious bargain was thunderstruck, but seeing that the other party to the bargain was in dead earnest, he made an offer of £200 to have it cancelled.

This tender, however, was promptly refused, but after much haggling, the deal was declared “off,” in consideration of the stranger agreeing to dine “Corry’s” shepherds and drovers. The feast, at which only the choicest of liquors was consumed, actually took place in one of the best hotels in the City, and cost the would-be wag the best part of £100.

Some time before his death, which took place in 1856, he boasted that he had “stood” the three yearly Falkirk Trysts, and the two Doune Fairs for the last 50 years, without missing a market.

Many stories are still told of this great Highland cattle-dealer, in Lochaber and district, and I would gladly set these down if space would permit.

For the information of young readers who may not know, the shooting lodge of Corrychoillie is situated in the sporting deer forest of Inverlochy, once the seat of the Abinger barons.

I have often heard the father and grandfathers of these energetic members of the Strontian Youth Club, telling most interesting and hair-raising stories of Corrychoillie’s adventures in the cattle-dealing world.

In passing may I relate this story concerning him. He once slipped in a river in Lochaber, but succeeded in swinging himself ashore. His shepherd, who was along with him, suggested that he should kneel down on the bank and thank his Maker for preserving his life.

“Ah well,” remarked Cameron, “I was very clever myself, or He would have done very little for me.”

Strontian (Sròn an t-Sìthein) is the main village in Sunart, an area in western Lochaber, on the A861 road.