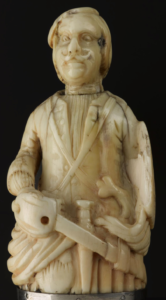 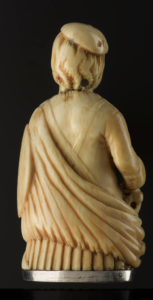 An exceptional Jacobite artefact here in the shape of an ivory snuff mull. Suggested place and date of manufacture is France c1715.
The Highlander depicted is fully equipped with broadsword, pistol, dirk and targe, and clad in his native attire – belted plaid and bonnet.
National Museum of Scotland.

A snuff mull is a variation of a snuff box, used for the consumption of tobacco in its powdered form.

The ritual that accompanied this became established around the 1600s, as snuff became popular in Britain. These can be found in many forms, a popular type being the ‘pocket snuff mull’.

Snuff mulls were especially popular in Scotland, with the name seemingly deriving from ‘snuff mill’.

Snuff mulls were made from the 1600s to the 19th century, with little change to their style or design during this time.

These were made from various resources, including silver mounted horn, sea shells, rock crystal and other semi-precious materials indigenous to Scotland.